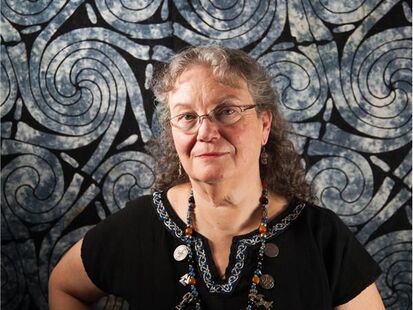 The Times They are a-changin'?

Contemporary paganism looks to the past for inspiration, but the forms it takes are ever evolving as pagan traditions adapt to the changing conditions of the modern world. The terrors of our times are also challenges which pagans may be uniquely prepared to meet with courage and creativity. Let’s look at what our own history has taught us, and the perspectives and skills we bring to this changing world.

Diana L. Paxson has been a practicing priestess since 1982 with experience in Ceremonial Magic, Neo-shamanism, and Wicca, but she is best-known as an Elder in the Troth, an organization dedicated to the reconstruction of the old Germanic religions, whose journal, Idunna, she edits. She pioneered the recovery of "high-seat" seidh, the oracular tradition of ancient Scandinavia, leads a Heathen kindred in Berkeley, and teaches classes on trance-work, the runes and Old Norse lore. She is a frequent presenter at pagan conferences and festival. Paxson is also the author of numerous short stories and novels on legendary themes, including the Wodan’s Children trilogy about the Siegfried legend, and non-fiction such as Taking up the Runes, Essential Asatru, The Way of the Oracle, and Odin, Ecstasy, Runes and Norse Magic. Her next book will be Carrying a Torch for Liberty, a book on political magic
​
For more information on Diana Paxson, check out her website at https://diana-paxson.com

Matter Matters: A War Baby’s Perspective and Reminisces on Pandora, Pandemia, and Pagan Pluralism During a Brave New World of Extreme Change

Attempting to imagine the situation ahead that will be after the forthcoming American elections and three or four days before the 20 January 2021 inauguration date is, to say the least, difficult. When I was three, I was employed in a war bond appeal by the Buffalo Evening News that concluded, “It’s YOU he’s looking up to … don’t let him down.” Since then and the ups and downs from being made aware of elves by a grandmother, having a ‘Ma who is good lookin’ and a daddy who is rich’, marriage to an eucalyptus tree near Santa Barbara to the loss of a brother because of Vietnam, the loss of hundreds of friends during the Aids crisis and more joyful moments of hearing lectures by Aldous Huxley, thrilling to the magic of the counterculture, ‘enduring’ more
than forty years of extremely happy partnership, and having the opportunity to commence a Pagan Studies programme at Bath Spa University in England, I would like to explain my understanding and criticisms of both religion in general and paganism in particular along with the challenges of both enchantment and our endangered world.  How do we adjust between organic spiritual fulfilment, on the one hand, and inept leadership, global pollution, climate change, uncontrolled viral invasion and communal fracturing, on the other?

Michael York’s doctoral dissertation was published as The Emerging Network: A Sociology of the New Age and Neo-pagan Movements in 1995. The same year saw the publication of his magnum opus, The Divine versus the Asurian: An Interpretation of Indo-European Cult and Myth. Other works are The Roman Festival Calendar of Numa Pompilius (1986), Pagan Theology: Paganism as a World Religion (2003), Pagan Ethics:
Paganism as a World Religion (2016) and Pagan Mysticism: Paganism as a World Religion (2019). In 2004, he published the Historical Dictionary of New Age Movements, and subsequently he edited A Special Issue on Astrology, Religion and Nature for the Journal for the Study of Religion, Nature and Culture (2007).  He has also written the chapters on “New Age and Magic” and “Shamanism and Magic” in Witchcraft and Magic: Contemporary North America (2005), the chapter on “The New Age Movement as an Astrological Minority Religion with Mainstream Appeal” in the Handbook of New Age (2007), the chapter on “Pagan Theology” in the Handbook of Paganism (2008), the chapter on “Neglect and  Reclamation of Water as Sacred Resource” in Deep Blue: Reflections on Nature, Religion and Water (2008) and the chapter “Magic, Astrology, Alchemy” in Science and Religion: One Planet, Many Possibilities (2015).
​
For more information on Michael York, check out his website at https://en.wikipedia.org/wiki/Michael_York_(religious_studies_scholar).